Are the Proposed Bans on Fracking Realistic?

Three of the leading contenders for the Democratic presidential nomination want to ban fracking in the United States. Senators Bernie Sanders, Elizabeth Warren and Kamala Harris have come out against fracking for oil and natural gas, promising to end the practice once in the White House. In addition, a group of political activists sent a letter to the United Nations asking the General Assembly to endorse a global ban on fracking. Environmentalists hope a ban on fracking would reduce U.S. reliance on fossil fuels, while other opponents of fracking have concerns about the potential for chemicals used in the process to seep into the ground and water supplies.

Fracking relies on two technologies: hydraulic fracturing, which involves pumping a mixture of water, sand and chemical into rock formations deep below the earth’s surface to release reserves of oil and gas; and horizontal drilling, which allows for the efficient recovery of that released oil and gas.

Are these proposals to ban fracking realistic? Does the President have the authority to implement a ban and what are the market implications of such a move?

According to a CNN fact check report, without an act of Congress, the President could not issue an outright ban on fracking across the United States. However, there are a number of regulatory and executive actions an administration could take to prevent or shrink the use of fracking technology, particularly on federal land. The problem is that most fracking takes place on private land, and any attempts to limit it would likely face many obstacles.

To prevent fracking on U.S. private land, an administration would have to work through regulatory powers which would face a myriad of legal challenges from states, businesses and local governments. If the administration worked with Congress to pass new laws on fracking, these laws could be undone by a future administration.2

Senator Warren’s campaign said it would try to enact a bill through Congress, as well as use rules and regulations (like the Clean Air Act and the Safe Water Act) to work toward eliminating fracking. Senator Sanders’ campaign plans to take similar actions. The Obama administration attempted to increase regulations on fracking and was mostly prevented by the courts.

Now for the market implications of a ban on fracking. Due to its share in the markets, energy experts say cutting off a significant portion of U.S. shale oil (fracking) supply could have profound, detrimental economic effects in the United States.

Percentage of U.S. Oil and Gas Production Derived from Fracking 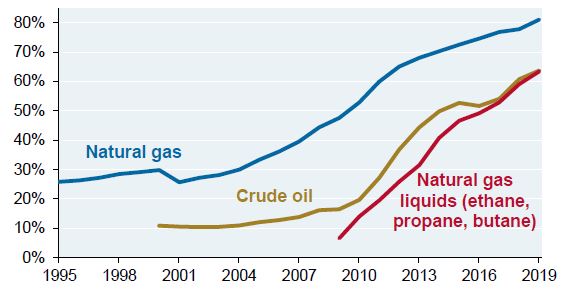 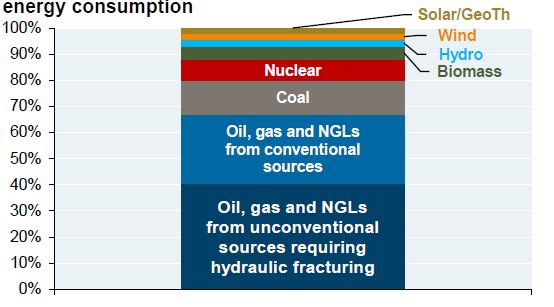 According to Baker Hughes, nearly 90% of all new oil and gas wells drilled today are horizontal, fracked wells.4  An immediate ban on fracking would result in an immediate decline in U.S. oil and gas production. Net oil imports, which have been trending down for years and are currently less than 1 million barrels per day, would immediately increase and our dependence on foreign oil would begin to grow. The chart below shows how net imports of oil, natural gas and coal together have decreased significantly since 2005.3 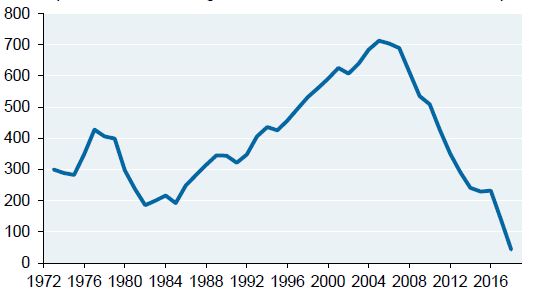 Liquefying and transporting natural gas abroad has become a growing business for the U.S. America’s LNG export capacity is expected to reach over 10 billion cubic feet per day in 2020, which is almost double the capacity in 2018.5

Fracking provides the U.S. with comparatively cheap gasoline, makes electricity affordable, shuts down coal-fired power plants, makes OPEC less powerful and gives Europe a choice for natural gas. Before fracking Russia had significant control in the natural gas energy sector. America’s new dominance has created options for global consumers. Oil prices spiked this month following the attacks that disrupted about half of Saudi Arabia’s oil capacity, which accounts for about 5% of the daily global oil supply.2 The market reaction would have been much greater were it not for the substantial increase in U.S. crude oil production over the past decade made possible by fracking. A ban on fracking would reverse these things and send energy prices higher.

Although U.S. renewable power generation is growing, the pace is not fast enough to abandon fractured natural gas and oil given U.S. goals of decommissioning aging coal and nuclear power plants and reducing its reliance on foreign oil.3 Wind and solar are part time energy sources and the technology for large-scale energy storage is yet to be developed. As a result, wind and solar together account for only 7% of U.S. electricity production and even less globally.6

Despite what candidates are saying, the reality is that proposals to ban fracking are not at all practical from a political or market perspective.  A combination of natural gas, wind and solar will be vital to the country’s energy requirements in the future. All three will be important and should be working together.