The Russian invasion of Ukraine and the unprecedented sanctions imposed in response by the U.S. and western allies have rattled the global economy and financial markets. The economic impact of the war comes against the backdrop of rapid inflation and energy prices that have been rising for months.

Russia’s invasion of Ukraine threatens to further disrupt global supply chains just as shipping delays were starting to decline. The invasion has upended supply chains for food, energy and industrial products, derailed global travel and driven volatility into world markets. The Ukraine crisis both magnified each threat and complicated the potential solutions.

Russia is a significant supplier of oil, natural gas and metals, and higher prices for these commodities are expected to inflict economic damage around the world. Europe relies on Russia for nearly 40% of its natural gas and 25% of its oil. Natural gas prices rose 20% after the war started, on top of earlier increases, and now are roughly six times higher than the beginning of 2021.1

Russia is the world’s third-largest oil supplier, producing around 10 million barrels per day (bpd) of crude, about half of which is exported.2 The Russian oil embargo ramps up pressure on the Organization of the Petroleum Exporting Countries (OPEC) to increase production, as such alternative suppliers could help balance the market. OPEC+ (the expanded version of the organization) has about 4 million bpd of spare capacity coming from Saudi Arabia, Iraq, Iran and the United Arab Emirates (UAE).2 However, increasing production would go against Russia, currently a co-chair of OPEC+. 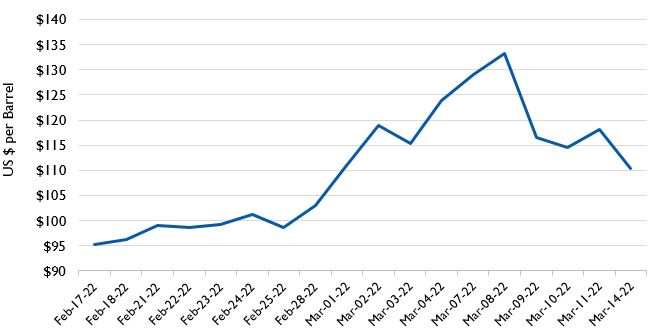 The UAE recently said it would push OPEC to produce more oil. The move marks a departure for the Persian Gulf producer after months of standing with Saudi Arabia and Russia. The UAE reversed its stance under pressure from the U.S., a key security partner and weapons supplier for the federation of Gulf emirates. Saudi Arabia and the UAE are the only two oil producers that produce well below their capacity, giving them the ability to increase their output. The UAE has about 1 million bpd of spare capacity while the Saudis have about 2 million bpd.4 U.K. Prime Minister Boris Johnson traveled to the Gulf to meet with Saudi Arabia and UAE leaders to try to convince them to increase their oil output.

U.S. shale production also could be profitably increased at prices far below current levels, but that would be a longer-term answer. OPEC could increase production much more quickly. Also, differences in oil composition can make it difficult for customers to directly substitute one crude for another. OPEC members have an uncomfortable choice to make.

Russia and Ukraine together produce 70% of the world’s neon, a critical raw material of semiconductors; 13% of the world’s titanium, which is used to make passenger jets; and 30% of palladium, which is utilized in cars, cellphones and dental fillings.1  Russia also is a major producer of nickel, used to produce electric car batteries and steel.

The agricultural supply chain coped well during the pandemic, as the world’s food system produced its usual 11 billion tons of food per year.5 However, international food markets will probably face shortages due to the conflict. Russia and Ukraine together supply almost one-third of the world’s wheat, a quarter of its barley and nearly three-quarters of its sunflower oil, according to the International Food Policy Research Institute.5 The United Nations estimates that the crisis in Ukraine could push international food prices up another 22% in its worst-case scenario.5

Food prices are high, which incentivizes production, but so are fuel and fertilizer costs, which squeeze agricultural profit margins. Farmers in the U.S. are bracing for a hike in the price of fertilizer, which was already at a record-high before the conflict. Russia, which is a low-cost, high-volume global producer of fertilizers, is the world’s second-largest producer of potash, a key nutrient used on major commodity crops and produce.6  Norwegian fertilizer maker Yara International said its European ammonia and urea production is running at less than half of normal capacity because of record-high natural gas prices further limiting supply.5

Even before the Ukraine crisis, the Iowa Capital Dispatch reported that farmers in the United States are likely to plant less corn and use less nitrogen fertilizer on their fields for next year’s growing season due to sky-high fertilizer prices and short supplies.6

Russia’s invasion of Ukraine is straining the global air freight industry as well. Up until recently, demand for goods shipped by air was robust, while the sluggish recovery in commercial air travel kept jet fuel prices low. Jet fuel costs have jumped along with crude oil and other petroleum products. Average jet fuel prices spiked from about $2.30 per gallon before the invasion to $4.00 per gallon.7

In addition, the conflict has complicated some key air freight routes, as Russia and its adversaries close their respective airspaces to each other’s planes. The skies over Europe and much of North America are closed to Russian flights, while most European and American planes can no longer fly over Russia, forcing carriers to seek alternative routes. Some routes, such as Helsinki to Tokyo, can’t be flown now. Per one estimate, 20% to 25% of the air freight capacity between Europe and Asia has been taken off the market, further raising costs.7 This results in higher prices for everything from smartphones to video games, and any other product shipped by air.

The Ukraine war coincides with a high-risk moment for the Federal Reserve and other central banks. Banks were caught off guard by the surge in inflation over the past year. Rising energy, food and services prices pushed already elevated U.S. inflation to a 7.9% annual rate in February.8 Surging energy costs related to the Russian invasion of Ukraine are pushing prices higher. Higher energy and food prices and deeper supply chain bottlenecks could put more pressure on inflation and force the Federal Reserve to accelerate its pending series of rate hikes.

In Europe inflation accelerated to a record 5.8% in February compared with a year earlier for the European Union.1 The fighting and sanctions that have disrupted Russia trade with the global economy threaten to send prices ever higher.

Beyond Russia and Ukraine, the biggest economic hit from the war is likely to be felt in Europe, which is closest to the conflict and heavily reliant on Russian energy. In addition, the European Union doesn’t have the counterbalance of a large domestic commodity sector to benefit from the current higher prices.

(6)  The Hill, Five ways the Russian invasion of Ukraine could impact the US economy, February 28, 2022.