The new year is starting with a massive influx of COVID-19 that’s different from any other during this pandemic. Daily Omicron infections in the U.S. have surpassed those of the Delta wave, CNN reported, while China posted the highest number of cases since January 2021.1

It’s difficult to measure how much the Omicron variant is affecting the economic recovery. What is known is that across the country, the rapid spread of the Omicron variant has already impacted businesses, transportation and emergency services. In Ohio, the mayor of Cincinnati declared a state of emergency after a spike in COVID-19 infections led to staffing shortages in the city’s fire department. In New York, staffing issues led to the suspension of several subway lines.

Oil price movements may offer a possible reading of COVID’s impact on the economy, primarily due to crude oil’s role in powering transportation. Oil prices were poised to have a yearly gain following a rebound from the pandemic, but the rally has faltered over the past couple of months in part due to oil demand concerns after the emergence of Omicron.

Oil prices dropped sharply late in November and early in December as the new variant emerged, with global benchmark Brent crude and U.S. West Texas Intermediate (WTI) crude ending November with their largest percentage declines since March 2020.2 Both benchmarks have regained ground but remain well below October peaks, when prices were around $85 a barrel.3 Oil prices settled higher on December 28, with Brent crude ending the session near $80 a barrel despite the rapid spread of the Omicron variant. Both Brent and WTI traded at their highest levels in a month.4 However, for the full month of December, WTI fell to a price of $71.71 with the Brent price at $74.17.5 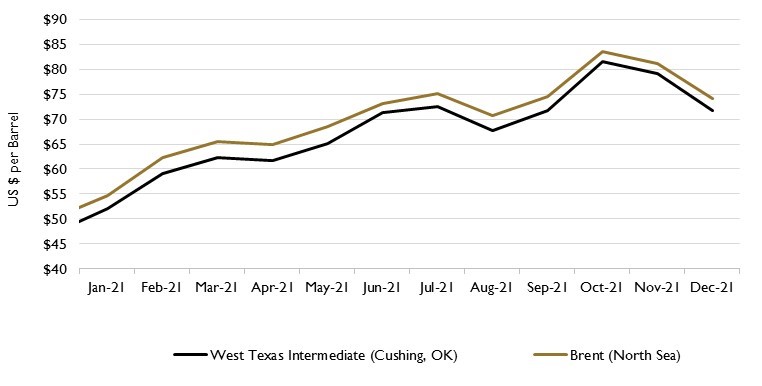 Oil prices were supported by supply outages and expectations that U.S. inventories fell during December. Three oil producers – Ecuador, Libya and Nigeria – announced production disruptions by declaring force majeure (unforeseeable circumstances that prevent someone from fulfilling a contract) in December on part of their production because of maintenance issues and oilfield shutdowns.

Ecuador’s government initiated force majeure over its oil exports and production contracts because of ongoing erosion in the Amazon region which ruptured Ecuador’s state-owned pipeline. Ecuador’s ministry did not provide details on when the pipeline would be repaired and resume operations. Libya’s National Oil Company announced that crude oil production would be shut in from four of Libya’s oilfields. Royal Dutch Shell’s Nigerian subsidiary declared force majeure on exports of crude oil after the obstruction of a tanker path by a malfunctioning barge.

Air travel, and therefore, the consumption of jet fuel will be most affected by the Omicron variant. Thousands of flights have been cancelled or delayed as airline staff and crew called out sick. The Federal Aviation Administration also warned of possible delays due to the agency’s own COVID-related staffing challenges.

In the United States, total cancellations for the holiday week reached 7,519 flights.6 In addition, JetBlue Airways Corp. said it would trim its schedule through mid-January as more of its crews are sickened by the latest coronavirus variant. The New York-based carrier said it would cancel about 1,280 flights through January 13th.7

In Europe, the Airport Council International reported that passenger traffic in European airports had decreased by 20% since the detection of the Omicron variant.8 The German airline Lufthansa plans to cancel 10% of its winter flight schedule due to the pandemic. From January through February 2022, around 33,000 flights will be cancelled by the airline.8

The Omicron variant may slow the recovery in demand for oil globally, but in a December report the International Energy Agency forecast the world’s demand for oil to return to its pre-pandemic level during the course of next year.3 The agency is expecting an increase in global oil demand of 5.4 million barrels per day in 2021 and 3.3 million in 2022, when demand will return to pre-pandemic levels at 99.5 million barrels per day.9

On the output side, the U.S., Canada and Brazil are expected to pump oil at record levels, raising non-OPEC production by 1.8 million barrels a day in 2022.3 Saudi Arabia and Russia, the two leaders of OPEC+, could also set production records if the alliance continues its policy of undoing production cuts implemented last year when the pandemic’s global economic impact was at its worst. At its last meeting, OPEC+ announced it plans to boost production by 400,000 barrels per day in January despite Omicron.2

The Omicron variant’s impact on global oil markets and the global economy won’t be as considerable as initially feared as the world becomes better equipped to manage COVID-19 and its related challenges. Governments and businesses now have more experience in dealing with the coronavirus. In addition, rising vaccination rates throughout the world could also play a part in lessening the variant’s economic impact.

(6)  NewsNation Now, At a Glance: How Many Flights were Canceled During Holiday Week, December 30, 2021.