Battery technology is an often overlooked market in renewable energy, but that is changing as energy storage technology is continuously evolving. New batteries are being researched and developed in a push to find long-duration, cheap storage. It’s not just about cost declines, it’s also about efficiency. The U.S. is projected to boost energy storage by more than 500% by 2025.(1)

Driven by falling prices and technological advances that enable batteries to store ever-larger amounts of energy, grid-scale systems are seeing record growth in the U.S. Most new utility-scale renewable energy projects are now including battery storage. Facilities are being built with storage systems that can hold enough renewable energy to power hundreds of thousands of homes.

These sector achievements are largely due to the auto industry’s race to build smaller, cheaper and more powerful lithium-ion batteries for electric cars. State clean energy mandates, along with tax incentives for storage systems that are paired with solar installations, are also playing an important role in the growth of energy storage.

A record-breaking 476 MW of storage resources were deployed in the U.S. in the third quarter of 2020, according to a recent report from Wood Mackenzie and the U.S. Energy Storage Association (ESA). This was a 240% increase over the previous quarter.(1) Nationwide, a record 1.2 GW of storage has been installed this year. That number is projected to grow to a total of nearly 7.5 GW — with a $7.3 billion annual market  — by 2025, predominantly due to large-scale utility procurements, most of which will be paired with solar resources.(1) The ESA expects energy storage deployment to be 3.6 GW in 2021. (2)

A majority of the growth in the third quarter came from front-of-the-meter deployments in California, New Jersey and Arkansas. Front-of-the-meter refers to a stand-alone system that sits “in front” of the meter and feeds power directly into the grid, as opposed to using the power on-site for a single building or facility. The residential storage market had about 7,000 deployments per quarter in 2020 and is set to expand by six times through 2025, with increasingly active markets in New York, Massachusetts, PJM (Pennsylvania, Jersey, Maryland Power Pool), Texas and Florida.(1)

Battery technology has advanced immeasurably in the last decade, demonstrated by huge increases in storage capacity and the falling cost of lithium-ion batteries. The price tag for utility-scale battery storage in the United States dropped nearly 70% between 2015 and 2018, according to the U.S. Energy Information Administration.(5) Market competition and rising battery production also play a role in falling prices. The U.S. National Renewable Energy Laboratory projects mid-range costs for lithium-ion batteries will fall an additional 45% between 2018 and 2030.(5)

The U.S. government is also paying more attention to the sector. The Department of Energy (DoE) just published its first comprehensive strategy on energy storage. The “Energy Storage Grand Challenge Roadmap” (ESGC) identifies cost and performance targets to be met in the coming years, and hopes to establish the U.S. as a leader in energy storage. The ESGC focuses not just on new technologies and research into existing technologies but also on helping companies commercialize these technologies. Over the last four fiscal years, the DoE has invested approximately $400 million per year into energy storage research and development.(2)

The December 2020 federal relief package to boost the economy due to the impact of the coronavirus pandemic, includes a two-year extension of the solar Investment Tax Credit (ITC), a 30% tax rebate for new solar installations. The legislation also includes the Better Energy Storage Technology Act, authorizing $1 billion over five years for innovation investments in energy storage technology.(2)

The growing trend of integrating storage is making utility-scale renewable energy projects more financially attractive to the capital markets as well, as it enhances the generation profile of the installation. For the first nine months of 2020, venture capital funding for battery storage companies totaled $1.2 billion, while corporate funding (including debt and public market financing) into battery storage companies reached $2.3 billion.(4) 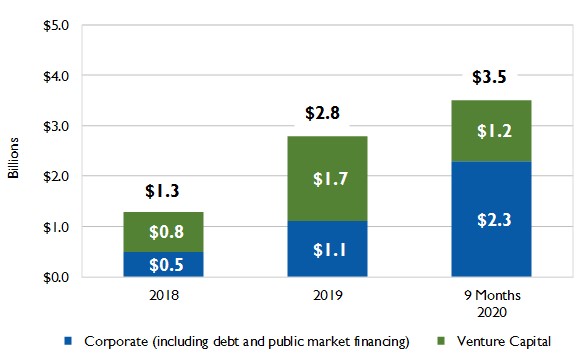 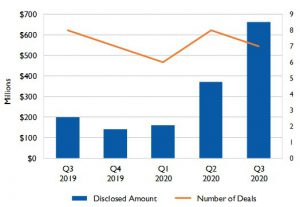 In 2019, venture capital funding into battery storage companies increased by 103% to $1.7 billion compared to $850 million raised in 2018. Seventy-eight venture capital investors participated in the sector in 2019 with top investors including BASF Venture Capital, Breakthrough Energy Ventures and Macquarie Capital. Total corporate funding increased to $1.1 billion in 2019 compared to $0.5 billion in 2018. Lithium-ion based battery technology companies received the most funding in 2019 at $1.4 billion.(6)

Increased renewable energy generation and a decrease in battery storage costs have led to a stronger focus on energy storage solutions and grid flexibility services. U.S. leadership in energy storage requires an approach that enables American firms to compete in markets around the world. Energy storage offers an opportunity to identify the most cost-effective technologies for increasing grid reliability, resilience, and demand management. The mass deployment of storage could overcome one of the biggest obstacles to renewable energy — its cycling between oversupply when the sun shines or the wind blows, and shortage when the sun sets or the wind drops.