Update on the Success of China’s Crude Oil Futures

It has been sixteen months since China launched yuan-denominated crude oil futures contracts on the Shanghai International Energy Exchange (INE). The contract was created to establish a China-based oil pricing benchmark for the Eastern crude oil market as part of Beijing’s broader strategies to gain clout in the global oil trade through internationalizing the renminbi (of which the yuan is the unit) at the expense of the U.S. dollar. To date, the contract has attracted impressive volume. From a standing start in March 2018, 12% to 13% of crude oil futures are now traded in renminbi in Shanghai.1

In January 2019, daily trading volume of front-month crude oil futures on the INE averaged 248.5 million barrels. Per The Wall Street Journal, this comprised roughly 20% of global trading in similar contracts at the time, and was close to trading volumes in front-month futures contracts of Brent crude oil (Brent), the European benchmark traded on the ICE in London. At the end of March, a year on from its launch, the Shanghai contract’s trading volume made up approximately 14% of the global activity in similar futures. This represented about half the volume of Brent.2 Brent is one of the two primary international pricing benchmarks alongside West Texas Intermediate (WTI) crude, the North American benchmark traded on the New York Mercantile Exchange (NYMEX). The bulk of crude oil trading still takes place in the U.S. off of the WTI benchmark. 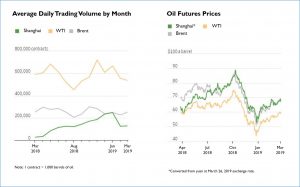 Since the 1980s, the Eastern market has relied on a blend of Dubai crude oil and Oman crude oil as its primary pricing benchmark, the former of which is calculated and reported by S&P Global Platts, and both of which are traded on the Dubai Mercantile Exchange (DME). At the most basic strategic level, the Shanghai contract was designed to address imperfections associated with the Dubai/Oman benchmark. First, it better reflects supply-demand conditions associated with the specific grades of oil transacted in Asia (medium sour crudes stored in bonded tanks near refining locations on the Chinese coast). Second, presupposing various critical developments, the Shanghai futures could provide commercial participants the opportunity to manage risk much more effectively and efficiently than is possible with the Dubai/Oman contract due to liquidity constraints.3 This would represent a radical shift in crude pricing for Asia from a reporting-based system to an exchange-based system for price discovery. Further, the Chinese see the Shanghai contract as a path to reignite international interest in the yuan, which has fallen amid the currency’s slump against the dollar and government interventions in the market since 2015.

Despite the strong liquidity that the adolescent contract has attracted since its launch, its ability to develop into a legitimate international benchmark is in question. Even with trading volumes creeping up on those in Brent, the ability of commercial participants to hedge risk factors, such as price volatility, using the contract has been limited. Trading volume has been concentrated within contracts specifying delivery in the current month and in the next month, leaving a gulf in liquidity in contracts nearing expiry and in those with delivery dates beyond the next month. These gulfs in liquidity, evidenced by the relative width of bid-ask spreads for these contracts, create price volatility in these sub-markets that render effective hedging activities difficult.

Further, most trading in yuan-based contracts has been initiated by domestic, rather than foreign, players. INE data from mid-December shows that around 92% of the trading volume and about 80% of the open interest was accounted for by domestic Chinese traders, while retail investors accounted for slightly over three quarters of the volume and over half the open interest.4 To become more successful, both in developing as a benchmark and in satisfying Beijing’s aim to internationalize the renminbi, the market must diversify to include producers, end-users and international shippers.

In addition to its technical shortcomings, the contract faces many, arguably more stubborn, macro-level impediments to its adoption as a benchmark. Non-Chinese buyers would have to gain comfort with not just currency risk, but also the level of government involvement in INE trading, the dominance of Chinese participants, and physical delivery at facilities controlled by Chinese companies. Structural issues with China’s oil industry also abound, including the virtual monopoly of the nation’s top three state-run producers, as well as the government’s propensity for intervention in financial markets and its firm grip on pricing.

Despite the magnitude of these impediments, the contract’s ability to become the preeminent Eastern crude oil pricing benchmark ultimately hinges on the very crux of China’s strategy in creating it. Beijing aims to replace the U.S. dollar, first as Asia’s trade currency, then as a global commodity currency.

Since the 1970’s, the U.S. dollar has been the default currency for pricing and trading in the global oil market. In 1974, the United States and Saudi Arabia signed an agreement committing the Saudis to accept only dollars for all its oil sales. A year later, dollar-only trading was extended to all of the members of the Organization of Petroleum Exporting Countries (OPEC). This created what became known as the petrodollar system, giving the United States the advantage of being able to use its own currency to purchase oil, while other countries that needed to buy oil had to build their own dollar reserves.

Those deals, and the petrodollar system that followed, were based on the fact that the United States was the dominant buyer of oil at the time. Things are different now. The United States has almost doubled its domestic crude production capacity over the past decade or so using shale oil technologies, which has made the country a net oil exporter for the first time in 75 years. Simultaneously, China has become the world’s largest oil importer, with nearly 70% of its demand met by imports. China’s demand is expected to grow from a current level of approximately 600 million tons per year to more than 750 million tons per year by 2040.5 With limited domestic production capacity, China is likely to continue to rely largely on crude imports.

China’s overarching goal isn’t to simply wrest a degree of oil pricing power away from the petro-dominant U.S. dollar; it is to slowly, but surely, replace the dollar in the global financial system.3 In keeping with this goal, Reuters reported in early July that China plans to launch another arrow in its strategic quiver by the end of 2019 with the opening of bonded low-sulfur bunker fuel oil contracts on the INE, denominated in yuan and open to foreign investors.6

While highly unlikely in the short-term, if key exporters and the market at large ultimately require a yuan-denominated crude oil benchmark, the contract will attract the necessary conditions to form a legitimate benchmark, the epicenter of oil pricing will shift from the Gulf of Mexico to Asia, and the U.S. dollar’s status as the world’s petrocurrency will be jeopardized. In the end, it is the market comprised of buyers, sellers, and traders who will decide, but substantial quantities of oil transacted in yuan is an increasingly likely scenario.

(3)  The Oxford Institute for Energy Studies, What Next for Asian Benchmarks?, July 2018.